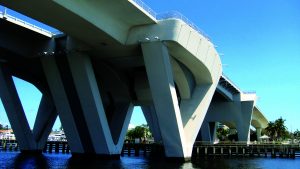 The 17 Street Causeway Bridge in Fort Lauderdale, coated with products developed by Florida-based TEX•COTE®, withstood the intense winds and rain brought on by Hurricane Irma despite the damage the massive hurricane caused to scores of other structures statewide. Hurricane wind speeds reached 85 mph and sustained for 8-10 hours in Fort Lauderdale where the 17

TEX•COTE® is a leading manufacturer of highway and bridge coatings and offers a complete line of decorative and protective high-build architectural coatings for commercial, industrial, transportation and residential uses. TEX•COTE® products have been used on many prestigious buildings, landmarks, control towers, bridges, and homes worldwide.

This bridge is significant because Fort Lauderdale is often called the “Venice of America” due to its many canals, some of which converge to the 17th Street Bridge.  The bridge stands 65 feet above the Intracoastal Waterway and has a protected walkway, offering walkers amazing views of the water, city, and yachts.

Since the founding of TEX•COTE® in 1961, the company’s ongoing research and development efforts have led to many industry advancements and the development of “green” products with low volatile organic compounds (VOCs). TEX•COTE’s ® patented Coolwall® IR System has been proven to reduce energy usage and its manufacturing process incorporates post-consumer recycled content.

Check out other articles that have featured us: